Hare and the Hounds 2 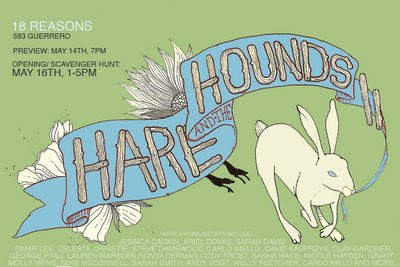 Over heard on the BENCH!

(looking at the sign)
"Hmm, Ghostface Killa's birthday. Woulda never figured him for a Taurus."
Posted by fayes video at 5:47 PM No comments:

I am looking forward to this!!!

Academy Award nominated filmmaker Kirby Dick (This Film Is Not Yet Rated) delivers a searing indictment of the hypocrisy of closeted politicians who actively campaign against the LGBT community they covertly belong to. OUTRAGE boldly reveals the hidden lives of some of our nation’s most powerful policymakers, details the harm they've inflicted on millions of Americans, and examines the media's complicity in keeping their secrets.

Now Playing at the Embarcadero Center Cinema
Journalist Chris Bull, Editor of GayCities.com,
In Person Saturday, May 9 for a Q&A
Following the 7:40pm Show!

Posted by fayes video at 1:48 PM No comments:

The old man suddenly spoke in a cracked and ancient voice. "Are you my father?" he demanded. "Because if you are, I wish you'd get me out of this place--or, at least, get them to put a comfortable rocker in here."

"Directing ain't about drawing a neat little picture and showing it to the cameraman. I didn't want to go to film school. I didn't know what the point was. The fact is, you don't know what directing is until the sun is setting and you've got to get five shots and you're only going to get two."


so how did one of my favorite directors totally fuck up a great story?

1. Making Benjamin polite. Fitzgerald's crabby old man of the story is lovable without being cute. Pitt is just a cute old Forest Gump.
2. Topical. Putting in the New Orleans disaster was just a bad idea. plain. simple.
3. Too much heart. It was sticky sweet.
4. No contemplation on the meaning and strangeness of life.

Other than that, I did tear up a little for some parts. And the make-up was top tits.

So many of you may not remember that Elaine has worked at Fayes for the longest amount of time. She, like Nina, started when she was 15 along with her older sister Nina. Confusing I know, but it's  a different Nina. Anyways, after graduating from high school Elaine moved to Santa Cruz and then transferred to Berkeley. While there she did some study abroad in Ghana... so that is why you may not remember her from the way back machine.  I got to sit down with Elaine via the internet and ask her some questions. 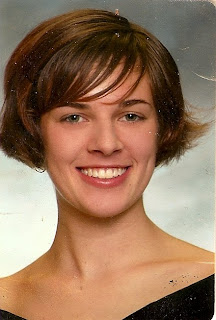 Hi Elaine. What high school did you attend? When did you graduate?
I attended Lowell high school in san francisco.  I graduated in 2004.
Do I have to answer in complete sentences?
Growing up in SF, particularly the mission, what would you say has been the biggest change?
The people, the park and the popularity.
Nobody had even thought of putting the words "mission" and "hipster" in the same sentence back in 1995.  People above the age of 12 only went to the park to buy/sell/use drugs or to suntan in a speedo. I went for the swings, but was careful to avoid the dirty needles buried in the sand.  My gramma, I was told later, was disappointed that my mom chose to live in the mission and raise her kids here; back then it was an "undesirable" neighborhood.  My best friend Francesca (who grew up in the sunset district) has admitted to me that she used to ask her mom, "are we going through crazy town?" when they would drive through the mission.
If you could pick an 80's movie soundtrack or storyline to be the "Elaine Harris Movie"  which would you pick?
I would choose the storyline of "Better Off Dead" just to pretend I was Monique so I could claim I kissed John Cusack as his adorable Lane Meyer character, before he got old and made movies like "must love dogs" and "the ice harvest."


Word on the street is that you really know how to break it down on the dance floor, what is your favorite song to dance to? Do you have any "signature" moves?
I can't say that I have a favorite song to dance to, but there's nothing like a little Michael Jackson or Salt N Pepa to get me moving.  I've got this one move that I'd say is my "signature" move, only because Mike can't replicate it. It's like a modified charleston, where I sort of step back and forth on my toes, traveling forwards and back, or in place, while simultaneously bending my knees with my heels pointed inwards, then kick a foot out to the side as I rotate my heels outward, straighten my knees and stand taller on my toes. I also sort of pinwheel my arms back and forth the opposite of the legs. Might easier to understand with diagrams, I think, or I could just show you. I also enjoy bringing the west african dance moves I've learned onto the dance floor. totally enhances the whole experience.


Did you participate in any activities while in high school? What were they?
I played the clarinet, bass clarinet, and contra bass clarinet (like a "bass" bass clarinet; it was bigger than me and looks like a giant paper clip) in the symphonic band.  I also picked up tenor sax just enough to join the jazz band my last two years of high school and I played in the pit orchestra for the school musicals. I was also on the cross country and track teams. Our relay team made it to the state meet one year and I was team captain of the sprinters in my senior year. (she really is fast, I've seen it in action)


I know you have been on the leader board for best overall performance at beer pong, but have you ever won a game of "Edward 40's Hands"?
If by "best overall performance" you mean "most likely to be drop kicked by Mike on the garage floor flooded with miller hi-life" or "first to shimmy under the table to 'get the balls back'" then yes, I consider myself a leader.

as for "edward 40 hands," for my 20th birthday a group of friends and i played.  i (being only 20) was unable to purchase the 40's, so my lovely older sister and her boyfriend bought me 40's of steel reserve (8% alcohol content!!!).  i don't remember if i won or not.  actually i don't remember if i finished my whole 80 ounces or not.  my sister's boyfriend took pictures at the party that to this day he has refused to show me and is holding them as blackmail for something...thanks sis!!!


You recently returned from study abroad in Ghana, what was your most memorable experience?
Probably the time when a group of us were traveling in mali and the 12 hour journey across the desert to timbuktu turned into a 27 hour sleepless adventure because the 4-wheel-drive jeep (circa 1970) we had bargained for hit a pothole.  the jeep, the 15 passengers and all our cargo went flying 6 feet in the air and landed on the back right tire. the u-bolt on the axle snapped in half and we were stranded in the desert for 8 hours with no food and minimal water while the diver hitch hiked back 4 hours to the town we just left to find spare parts.  when he finally returned, we held flashlights for him as he fixed the car in the dark in the desert and we were on our way driving faster than ever because he wanted to make up time. i admire those whose daily lives have as much (and even more) uncertainty, fear, and bad luck as we had that day.  i feel lucky to be alive.


If you could come up with a coffee drink special for Fayes, what would it be? Do you have a specific coffee routine?
coffee milkshake!!!!!!

I started drinking coffee regularly a short while after i first started working at fayes (fall 2001).  regular coffee, cream and sugar please. it got me through high school.  faye's did; and the coffee. i was pretty much "on it" (though it wasn't always "necessary" but there were always those days when i had a lot going on that if i DIDN'T have coffee...) almost all the way through my college years (i can say that now, right? my COLLEGE YEARS) until i went to ghana and sort of voluntarily and involuntarily quit cold turkey for 6 months because the choice was between nesacafe and nescafe with powdered milk.  i chose water.  after not drinking coffee for 6 months, i returned to find that a good ol' cup of joe from faye's made my tummy upset and since then i stick to teas and the sporadic chai. i figure it's better for me anyways, and who needs coffee if you're out of school and don't work a full time job? only recently have i tried to occasionally sip
on some coffee, but even now i can only have a 1/2 teeny or so before my tummy starts to get uncomfortable.  not really a coffee routine, more of a "once upon a time..." coffee history tale. sorry. too detailed, probably.


What is your favorite Fayes story?
There are too many!!! but the one about how Robin and Mike saved the neighborhood at 4am by unclogging the storm drain in front of tartine always makes me smile.  there's also the one involving the Fayes holiday party, broken glass, arguments about long division, white russians and Matthew's lap...


And since you were not at the camping trip last summer a few questions you may have missed from around the fire:

-if you were an animal which would it be and why?
uuugggghh.  this is like asking a group kindergartners what their favorite color is. one says "red," the next says "blue," another "green" and then the smart alec one with the 64 box of crayolas at home says something like "burnt sienna" or "chartreuse" so the teacher responds with, "that's an interesting choice," and all the others feel bad 'cause in their minds they're thinking, "damn, why didn't I think of that?"

but, right now, i'm liking the idea of being some sort of coastal migratory bird 'cause i like the idea of always being with your pals and going back and forth between two beautiful places that you call home.  but i'm probably more like a hummingbird, jettin' around solo, moving too fast and trying to do too many things all at once.  so, hummingbird it is, unless someone comes up with something better.

josh/mandalyn, daniel, troy
Thanks Elaine!!!!
Posted by fayes video at 10:32 AM No comments: