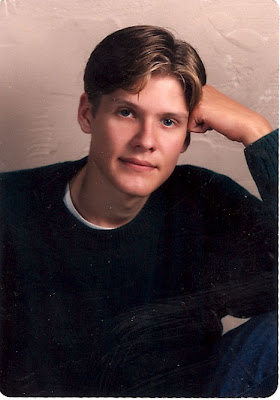 Hey! It's Michael McConnell!
This handsome devil comes to you all the way
from Michigan and has been a fixture of the Bay Area Art Scene since the late 90's.
Some of you may have seen those piercing blue eyes staring at you from behind the counter here at Fayes Video and Refugee Camp... that's because he is the other half of Fayes and responsible for the personal touches you see around the store. He usually has the inside scoop on the haps of the neighborhood and has brokered a few apartment deals over the years.
I got the chance to sit down with Mike and play Q&A with 18th street's favorite son.


WHAT ACTIVITIES WERE YOU INVOLVED WITH in High School?
I was involved in a bunch of activities, but spent most of my formative high school years
hanging out in the theater department... building sets and in some plays.
I also was president of student council, national art honor society, and thespian troupe 354.


ANY CLUB OR GROUP you WISH YOU WOULD LIKED TO HAVE BEEN APART OF and WHY?
Not really.

WHAT WERE YOUR 3 FAVORITE BANDS in HIGH SCHOOL?
I never really was "into" music when I was in high school. However, when we first got MTV i remember always waiting for certain videos... Twisted Sister "were not gonna take it" was number one.

NAME 3 BANDS that SUM YOU up TODAY.
I don't know if they sum me up, but generally like all they do... Band of Horses, Mates of State, and Handsome Furs.

BESIDES BEING AN ARTIST or PROFESSIONAL GAMBLER, WHAT ELSE DID YOU WANT TO BE WHEN YOU WERE LITTLE?
A marine biologist or veterinarian.

PICK 3 OCCUPATIONS YOU COULD SEE YOURSELF DOING TODAY and 3 'JOBS' YOU ARE GLAD YOU DON'T HAVE.
yes- 1. art teacher 2. therapist 3. illustrator
no- 1. telemarketer 2. yoga instructor 3. professional ice skater

TELL THE PEOPLE WHAT BROUGHT YOU OUT TO CALIFORNIA.
A U-haul.

GIVE US 3 WORDS THAT YOU LIKE HEARING and 3 WORDS YOU HATE TO HAVE UTTERED.
Like- 1. strategic 2. buoyant 3.chartreuse
Dislike- 1. pop 2. package 3. gig

Without saying "GOONIES", what movie sums up your past, your present, and your future.
"Bring It On"

WHAT IS SOMETHING YOU THINK PEOPLE DON'T KNOW ABOUT YOU and WILL FIND OUT BY READING THIS BLOG.
I used to work in a veterinary clinic, and that i'm gay. Ha.

FAVORITE FAYES STORY.
hmmmm thats a hard one... there have been so many.
though maybe a little schmaltzy i'd have to say, hearing how fayes was a place of refuge right after 9/11.
i kind of think it just sums up the store... a place where people make connections...

That's funny.. I would have gone the same way...poor Matisse.

Mr. Mike... thanks for taking time out an answering some questions.