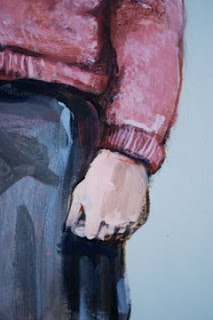 Portraiture becomes the unifying theme of the four artists' inquiry, the research perimeter for their intervention. The physical appearance becomes a symbol for personal identity, condensed and reduced to a single expression, expanded into the viewer’s mind into an imaginary narrative.

Facial expression and body language are usually considered as suggestive of stories laden with our personal interpretations, thus reducing in one single observed gesture the complexity of the individual. However, one soon realizes that in reality, unlike photographs that do capture an expression in a moment, painted portraits are the negation of the instant, thus raising important issues about time, truth, permanence, and perceived identity.

Kirstine Reiner is the author of a series of expressionist portraits. In these subjects the artist seems to seize upon a secret meaning, an inner space less concerned with a physical likeness or the final outcome, rather striving to achieve an uncensored reaction and interpretation of the model.

The work of Michael McConnell pivots on the collection and analysis of autobiographical stories. His paintings, reminiscent of old photographs, blur the line between the observed and the imagined. A closer observation of playful images of children and animals reveals darker stories of skepticism and failure, layered with narrative possibility.

With great care, Berlin artist Lars Theuerkauff starts from a disarray of paint marks that finally unite in coherent images. The images disappear at close up, lost in a contemporary pointillism that make the images almost accidental. In his work Theuerkauff represents and gives form to the most secret and intimate of human spaces - that of the dream and of the subconscious.