I haven't posted in a while owing to the fact that school has started, I've resettled in Brooklyn, and I've been working at a new job. There's a lot going on. But I felt like it was time to post some updates on the Fayes Blog.


I am now living in Park Slope, Brooklyn, and loving it. On average, it's an older neighborhood, so there are a lot of children, dogs, pregnant ladies, and strollers. It's a refreshing change of pace compared to the neighborhood I go to school in, where there are scores of fashion-focused young folks.

I found my apartment on Google Maps street view. That's where I live on the second floor! 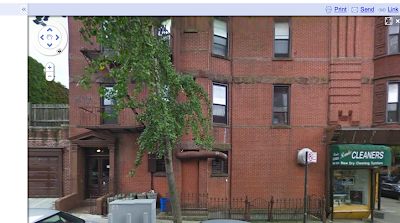 I'm also working in Park Slope, at a "Patisserie." It's very chill, kind of reminiscent of the Fayes vibe. I make coffee, take sandwich orders and serve pastries. I've been told Steve Buscemi lives in the neighborhood and that his brother loves the place I'm now working at, so if I'm lucky, I'll get to serve Buscemi a brioche in the near future. A brioche for a Buscemi! Like Fayes and Dolores Park, Park Slope has its own unique cast of crazies. I'm getting to know them all. Looking at you, Sock Man!


I have met Claudia of the Magnetic Fields and Lee and Tyler, brothers, of Clap Your Hands Say Yeah. Claudia actually came in with a Fayes regular who was visiting friends, including Claudia, in New York and just happened to come in to my new work for a treat. It's a small world.


School is going very well, I'm especially loving my painting class. I have great professors this semester, all of them. Well, maybe except for my logic professor. She's nice enough, but not a very gifted public speaker. However, as in the case of my drawing professor, it is pretty inspiring learning from someone who was a friend and classmate of Roy Lichtenstein.


You might have heard we had a tornado here. We did. It apparently touched down in Long Island, Queens, and Brooklyn, (which I guess technically are also Long Island). I'm convinced its point of contact in Brooklyn, or at least one of them, was here in Park Slope. Actually, that's probably been confirmed by now, but I just don't watch TV. I was underground, on the subway, during the 5 minutes it took for the storm to plow through the neighborhood, so I emerged in the middle of quite a scene. The Brooklyn Industries store 5 blocks from my house was hit by lightening, resulting in a clothing rack flying out the window onto the sidewalk. Brown stones had fallen off the signature local brownstone houses. And a half block below my house, a tree was uprooted and blown down on top of a car. The damage was considerable. Pretty exciting, all in all. Luckily, only the floor lamp in my room had been blown over, nothing more serious than that. Last autumn, a tornado touched down in Central Park. Then this. I'm bringing the extreme weather to New York.

This is a photo of the tree damage down the block from me:

I've been hearing quite a bit about the vendor cart in Dolores Park debate. I'm not going to express an opinion as I feel too removed to have an informed one. All my information comes second or third hand, from mostly reliable sources to be sure, but I just want to wish the neighborhood well while it's in the middle of this kerfuffle. I know just how much Fayes genuinely cares about the well-being of the park and neighborhood and I think you're all setting a good example by exercising your right and ability to speak out against that which you see as detrimental to the neighborhood.


I miss you all very much. Congratulations to Rachel and Matthew on recent birthdays, I hope they were fun. I'm sorry I wasn't there with you. And a huge congratulations and hug and slap on the back and noogie to Matthew on becoming a married man. I'm wishing you and Kate all the good things I can think of.

PS Patrick. Can I expect my own copy of You Can't Outrun The Cat in the mail after the release date? Steve and I are waiting expectantly. I don't want to have to hold off until I come home, I need to know how it ends!
Posted by fayes video at 6:32 PM